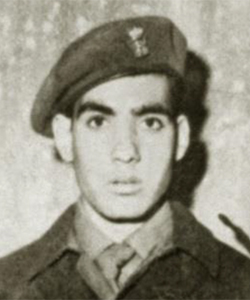 Michael was the son of Leandros and Koula Michael. During the Turkish invasion he was a soldier of the 251 Infantry Battalion, in the area of Glikiotissa, west of Kyrenia. On July 20-22, he fought in the area of Saint Georgios in order to prevent the Turkish forces from entering the town of Kyrenia. Then, he went to Nicosia. He was last
seen on August 14, 1974 in the area of Koutsoventis. His family built a memorial structure in the village of Mathikoloni, Lemesos, in an area offered by the village’s community council.