The Destruction of Religious Monuments and Archeological Sites in Karavas

You are here: Turkish Invasion1 / The Destruction of Religious Monuments and Archeological Sites in Kara...

The Church of Saint George

The parish church of Saint Georgios was built in the southeast part of Karavas. In the 18th Century, there was a monastery built on that very same area but it was destroyed at the beginning of the 19th Century. The current basilica church was built between 1843 – 1854, and it has a polygonal dome. The paintings and the woodcarving of the iconostasis, the pulpit and the women’s seats are truly remarkable. The wood craved prophets at the top part of the iconostasis are also impressive.

Nowadays, the Church of Saint Georgios is completely derelict and is in desperate need of restoration. 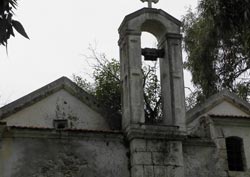 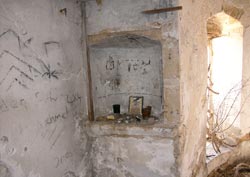 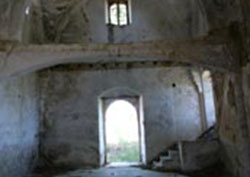 The Church of Saint Irene

The church of Saint Irene was built on the mountainside of Pentadaktylos in the southwestern part of Karavas. The church was built in 1804 by Protosiggelos Lavrentios and his son Xatzinikolas, who was killed during the massacre of the 9th July 1821. The inscription found on the icon of Saint Irene states that Protosiggelos and Xatzinikolas built the temple. A different yet exquisite icon is that of Saint Eftichios, Saint Eleftherios, Saint Georgios, Saint Prokopios and Saint Marina which dates back to 1766.

Nowadays, the church is also in terrible shape. It has been desecrated and abandoned, and is in desperate need of restoration. 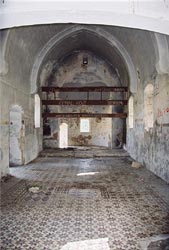 The church of Evangelistria is the biggest church of Karavas and it is located in the centre of the village. The plot on which the church stands was bought by the monastery of Kikkos and the church was built between 1906 – 1917 with the proceeds of a fundraising initiave among the people of the village. The construction of the church took place under the supervision of the former mayor of Karavas Mr. Grigoris Xatzilambrou. The church hosted the festive doxologies of all national anniversaries. It was also the starting point for all the parades that marked the opening of celebrations in Karavas. 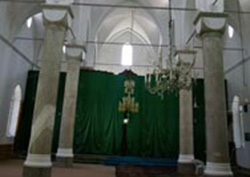 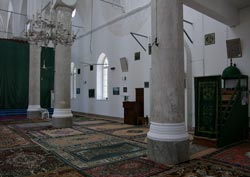 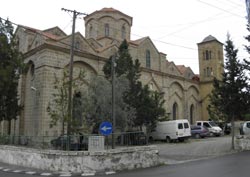 The monastery of Acheiropiitos is one of the most remarkable byzantine monuments of Cyprus and it is built on the ruins of an older basilica church of the 6th – 7th Century. Tradition has it that the church was named Acheiropiitos because it was not built by human hands. Centuries ago, when the Turks were about to burn Asia Minor, the Virgin Mary, who had her church on the opposite coast, lifted it from where it was and transferred it to Cyprus on the coasts of Lambousa in order to save it.

From the icons, one can distinguish the miraculous icon of the Virgin Mary, in which it is believed that the Holy Cloth is kept. At the foot of the icon there is an inscription saying that monk Philotheos made a new icon of Virgin Mary in 1765, in which he placed “part of the cloth” he found after the Turks had broken the old icon. The Acheiropiitos monastery operated as the first primary school of the area during the years of the Turkish occupation.

The monastery stands derelict and silent, located in a Turkish military area. 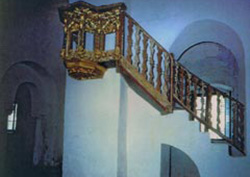 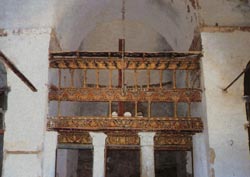 The church of Saint Evlalios

To the east of Acheiropiitos, in the area of ancient Lambousa, one can find thechurch of Saint Evlalios, dedicated to the first bishop of Lambousa. The church was built on the remains of an older church in the 16th century.

The history of the church is similar to that of Acheiropiitos, that is, it was built in the 6th, 11th and 16th centuries. The surviving church was erected by Archbishop Neophytos in the 16th century and is of the Franco-Byzantine style.

The church is located in a Turkish military area near the monastery of Acheiropiitos. It lies abandoned and desperately needs to be restored.

The Archeological Site of Lambousa

Lambousa was the first capital of the area of Kerynia and the headquarters of various Lambousa bishops with the first being Saint Evlalios, whose chapel still stands on the ruins of ancient Lambousa, known as “Katalymata”. According to Stravonas, just after the Trojan War, Praxandros and the Lakones from Peloponnisos built ancient Lapithos in this area, which later evolved into a kingdom that flourished during the Roman and Byzantine years. This kingdom was so brilliant and had such wealth and beauty that the Byzantines called it “Lambousa”. In the “Katalymata”, which are near the harbour of Karavas, lots of ancient artefacts have been discovered, including jewellery and silver trays.

The archeological site of Lambousa is also located in the Turkish military area and no effort is made to protect or preserve this historical area. Rumour has it that there have been many illegal excavations in the area and many of the ancient Lambousa ruins have been destroyed. 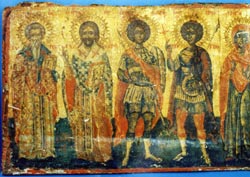 A cemetery is an important and sacred place for all societies. It is the place where our ancestors are buried, the place which reminds us of what our ancestors had gone through and what they had faced in order to provide for us.

The present state of our cemeteries is truly revolting. The broken crosses and desecrated tombs evoke feelings of frustration and rage.

The consequences of the Turkish invasion are evidently horrible. The people of Karavas are still patiently waiting for the end of this long and painful torture 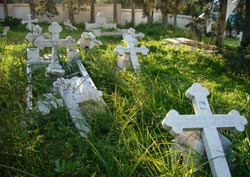 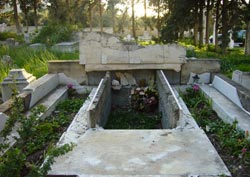