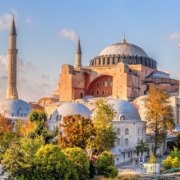 The Municipality of Karavas together with all the Karavas Unions and Associations, condemn the decision of Turkey to convert Hagia Sophia into a mosque.

Hagia Sophia was built as an Orthodox Christian church and functioned as such for many centuries. It has been the focal point of many historical events for more than a millennium.  Furthermore, as an architectural creation, is an inheritance to all Humanity. That is why, this act of Turkey to change the status of Hagia Sophia from museum to a mosque, is not only disrespectful to the Orthodox Christian Religion and contempt for history, but also an insult to the World Cultural Heritage. It offends every man and every culture, undermines the peaceful coexistence of religions and is contrary to any notion of morality and ethics.

Similar and worse is the behavior of Turkey towards the religious monuments of occupied Cyprus, which are daily desecrated and systematically destroyed. All of the churches and chapels of our occupied Municipality are in a miserable condition with the exception of our beloved church of Evangelistria which has been turned into a mosque.

We the people of Karavas, call on the United Nations, UNESCO and all the Governments of the world to act promptly, vigorously and decisively so that Hagia Sophia remains intact, as a World Heritage Site, a legacy and a jewel of Humanity. Along with all the looted churches of Christianity.

For the Karavas School Board, the President and the Council Members

For the “Karavas Refugee Association” the President and the Council Members

For the “Lampousa” Association of America, the President and the Council Members

For the “Lampousa” Association of Australia, the President and the Council Members

For the Lapithos, Karavas Association of the United Kingdom, the President and the Council Members

For the Karavas Athletic Union “Lampousa”, the President and the Council Members

For the Municipal Youth Council of Karavas, the President and the Council Members