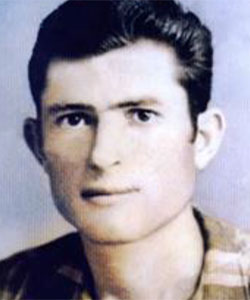 Born in Lapithos, Theodoros was married to Yianoula Damaskinou with whom he had 3 children; Irene (10 yrs), Maria (8 yrs) and Neophytos (7 yrs). He is one of the 12 people who were brutally killed by the Turkish Invaders on July 21st 1974. His remains were identified through a DNA analysis, within the framework of the CMP project. Theodoros was buried on July 19th 2008, together with father-in-law and his 2 brothers-in-law who were also identified through a DNA analysis. His memorial service took place at the church of Apostolos Loucas in Saint Athanasios, Lemesos.