The Turkish invasion of 1974

You are here: Turkish Invasion1 / The Turkish invasion of 1974

On July 15, 1974, the military junta then ruling Greece organised a coup to overthrow President of the Republic Archbishop Makarios, and towards this end used the forces in Cyprus to defend it from the Turkish assault. President Makarios managed to flee abroad, where he continued his struggle for the just cause of Cyprus. Turkey, on the pretence of the coup, invaded Cyprus on July 20, with a landing fleet and air force and by July 23, when the ceasefire was achieved, managed to establish an assault bridge in the north, in the Kyrenia region. From this assault bridge, material and men began to land on the island and on August 14 the Turkish invasion forces launched a fresh offensive, placing about 37% of Cypriot soil under their control.

Ankara tried to present the invasion as a peace operation, which aimed at restoring the constitutional order that had been violated by the coup. However, even after the restoration of the constitutional order and the return of President Makarios in December 1974, the Turkish troops remained and promoted Turkey’s plans to colonise Cyprus as a first step towards annexation. With force (cold-blooded murders, rapes, assaults, torture) 200,000 Greek Cypriots, 40% of the total Greek population of the island, were forced to abandon their homes in the occupied areas and become refugees in their own homeland. The few thousand Greek Cypriots that remained in their homes after the invasion were forced to abandon them gradually, with various oppressions, blackmailing and other actions. Out of the approximately 20,000 that had originally remained, only a few hundred are still living in their homes in the northern part of the island, mainly in the Karpass region. 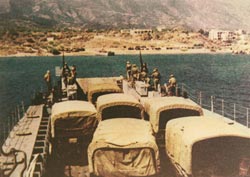 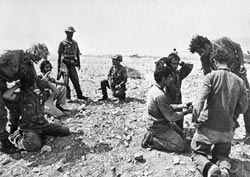 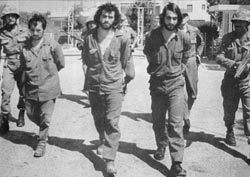 The efforts of the Greek Cypriot side to achieve a negotiated settlement always stumbled on Turkish intransigence. On February 13, 1975, Rauf Denktash moved a step further towards the division of Cyprus, proclaiming the occupied area the “Turkish Federal State of Cyprus”.

The Turkish Cypriot leader gave a clear definition of his intention to consolidate the fait accompli, instead of seeking a solution, when in July 1982 decided to give the Turkish

Cypriots and the settlers from Anatolia “title deeds” for Greek Cypriot properties. Furthermore, the occupation regime created “ministries” and “services”, started issuing “travel documents” and established the Turkish pound as the currency in the occupied area. He also proceeded to create a “central bank” as a further step towards the steadfast implementation of Ankara’s policy to annex the occupied area of the island to Turkey.

And while the UN Secretary General was developing a new initiative to begin substantial talks for a just solution of the Cyprus problem, Denktash proclaimed on November 15, 1983, the so-called “Turkish Republic of Northern Cyprus”.

The UN Security Council, with resolutions 541 and 550, deplored as legally invalid the proclamation of the pseudostate and called on all countries not to recognise it. Only Turkey recognised the pseudostate. 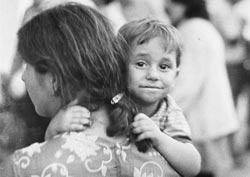 37% of the territory of the Republic of Cyprus is under occupation.

200,000 Greek Cypriots – one third of the total population – were displaced from the occupied northern part, where they comprised 80% of the inhabitants, and are being kept away from their homes and properties, while the Turkish Cypriots in the free areas were forcibly transported by their leadership to the occupied areas.

1,491 people continue to be to date missing and the Turkish side refuses to cooperate to determine their fate.

Only a few hundred enclaved (out of 20,000 at the end of 1974) still stay in their occupied villages and live under conditions of oppression, intimidation and deprivation.

40,000 Turkish troops, equipped with modern weapons and backed by the air force and navy, continue to be stationed in the occupied region.

About 120,000 settlers from Anatolia have been transferred and installed in the occupied area, aiming at the changing the island’s demographic structure.

40,000 Turkish Cypriots out of 103,000 have emigrated since 1974 from the occupied areas (according to Turkish Cypriot newspaper Yeniduzen, 30/8/94) due to the economic, social and moral abjection there.

The occupation regime methodically implements a long-term plan to eradicate the 9,000-year-old cultural and historical inheritance of the occupied areas:

78 UN Security Council resolutions and 13 General Assembly resolutions on Cyprus between 1974 and 1999 are being blatantly ignored by Turkey.

FOR MORE INFORMATION ON THE MISSING PERSONS FROM THE TURKISH INVASION, PLEASE VISIT THE FOLLOWING SITE. 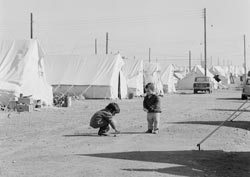 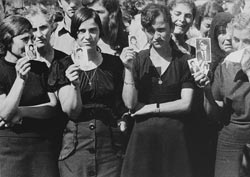 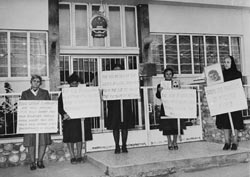